Twelve U.S. states generate more than 30% of their electricity from nuclear power

The Grand Gulf Nuclear Station in Port Gibson, Mississippi, is the largest single nuclear reactor in the United States, with a capacity of more than 1,400 megawatts (MW). The largest nuclear power plant, however, is the Palo Verde nuclear plant in western Arizona. Palo Verde has three reactors and is the largest power plant in the United States by annual generation. In 2019, Palo Verde produced nearly 32 million megawatthours, more electricity than any other plant in the country.

Two new nuclear reactors are under construction in Georgia at the existing Vogtle nuclear plant. Each new reactor has a planned electricity generation capacity of about 1,100 MW. 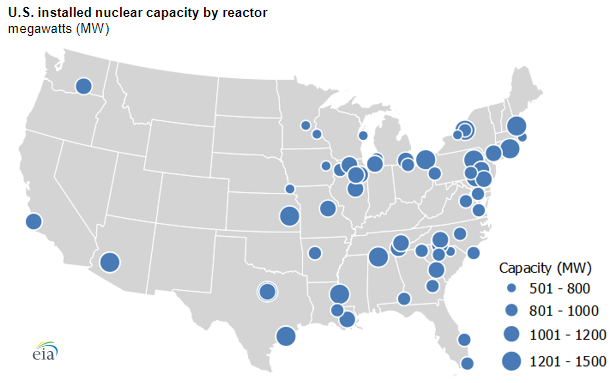 The U.S. Nuclear Regulatory Commission (NRC) licenses nuclear reactors to operate for 40 years. After that, reactors can apply to renew their operating licenses for up to 20 years at a time. All but two reactors in the United States have applied for and received license renewals from the NRC; the Clinton Power Station (licensed in 1987 in Illinois) and Watts Bar Unit 2 (licensed in 2015 in Tennessee) are still operating on their initial licenses. Clinton’s initial license does not expire until 2027, and the station has until 2024 to submit its renewal application to the NRC. Watts Bar Unit 2 will not need a license renewal until 2050.

In late 2019, the NRC approved a subsequent license renewal for two units of the Turkey Point Nuclear Generating facility, marking the first time a nuclear reactor’s lifespan has been extended from 60 to 80 years. The NRC also approved Peach Bottom Atomic Power Station’s Units 2 and 3 application to continue operating to 80 years in March 2020.