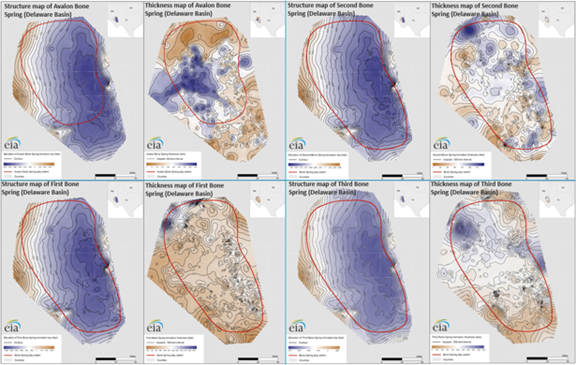 The U.S. Energy Information Administration (EIA) has released new maps and geologic information for the Bone Spring play in the Delaware Basin, which spans from southeastern New Mexico to western Texas. The updated information includes formation geology, deposition history, and regional tectonic features. The Delaware Basin is in the western part of the larger Permian Basin, one of the most prolific areas for oil and natural gas production in the United States.

Each interval has very low permeability, which means that oil and natural gas cannot flow easily. Recent advances in completion techniques have increased oil recovery factors to as high as 34%, meaning 34% of the estimated resource base in an area is produced.

EIA’s Maps: Oil and Gas Exploration, Resources, and Production page compiles the maps EIA has added or updated for the Bone Spring formation and other major shale plays.