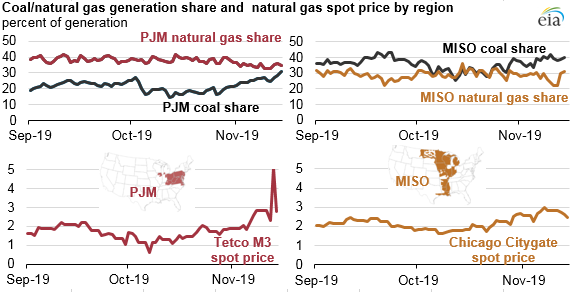 A historic November cold snap sent temperatures below freezing in 75% of the Lower 48 states. Because of this cold snap, the price of natural gas increased from an average of less than $2.00 per million British thermal units (MMBtu) in October to a mid-November high of $5.11/MMBtu at the Tetco M3 hub, located in northeast Pennsylvania in the PJM Interconnection (PJM). Prices rose about $1.00/MMBtu and reached nearly $3.00/MMBtu at the Chicago Citygate hub in the Midcontinent Independent System Operator (MISO). These price increases resulted in coal-fired power generation replacing natural gas-fired generation starting in late October in both of these regional transmission organization markets. In both PJM and MISO, where strong competition exists between natural gas- and coal-fired generation, relative shifts in fuel prices can influence which type of power plant operates.

PJM. The PJM Interconnection spans states in the U.S. Middle Atlantic. Cold weather in that region caused the natural gas spot price at the Tetco M3 trading hub to rise from less than $2.00/MMBtu at the end of October to a high of $5.11/MMBtu on November 13, the peak of the cold temperatures. On November 9, the share of natural gas-fired generation in PJM decreased to 34%, its lowest level since May. Conversely, the share of coal-fired generation increased to 31% on November 14, which was the highest coal share since March.

EIA collects the data for the Hourly Electric Grid Monitor from Form EIA-930, Hourly and Daily Balancing Authority Operations Report, which includes hourly electricity demand, forecast demand, net generation, and interchange data. The data are provided by the 65 electricity balancing authorities that operate the electric grid in the Lower 48 states and maintain real-time balance between electricity demand and supply on the grid.