Winter energy bills in the United States likely to be lower than last year&#039;s

On average across the United States, households can expect heating expenditures this winter (October through March) to be lower than last winter’s, according to the U.S. Energy Information Administration’s (EIA) Winter Fuels Outlook, released at noon today. EIA expects households that primarily use electricity or natural gas as their heating source to spend slightly less than last winter, households that use heating oil to spend 4% less, and households that use propane to spend 16% less. Only natural gas bills in the South are likely to rise significantly, by about 4%, primarily as a result of higher regional natural gas prices. EIA’s forecast of winter heating expenditures are based on fuel price and consumption forecasts from EIA and weather forecasts from the National Oceanic and Atmospheric Administration (NOAA).

To produce regional values over the winter, NOAA weights heating degree days by population and sums them over time. NOAA expects the United States as a whole to experience 3,635 heating degree days this winter, a value slightly lower (warmer) than the average of the previous 10 winters. Seven of the past 10 winters have been within 10% (either warmer or colder) of NOAA’s forecast.

Fuel expenditures in EIA’s Winter Fuels Outlook reflect consumption and the resulting bills for all uses of energy in the household—not just heating. This approach contributes to the differences in expected expenditures across fuels. Natural gas is the most common space heating fuel in 29 states and the District of Columbia. Electricity tends to be more common in southern states. 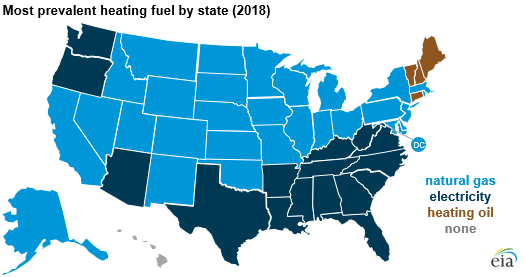 EIA’s Winter Fuels Outlook also considers adequacy of stored energy at the beginning of the winter season. Natural gas storage has seen a significant rebound in the United States over the past year. Working natural gas inventories in the Lower 48 states began the injection season on April 1 almost 30% lower than the previous five-year average. By the end of October, the end of the injection season, EIA expects working gas inventories in the Lower 48 states to be 2% higher than the previous five-year average.

Although the total of all heating oil inventories in the Northeast was 26% lower than the previous five-year average at the end of September, EIA does not expect significant supply disruptions or price fluctuations. Heating oil can be transported to the Northeast by pipeline, coast-wise compliant vessels from other U.S. ports, and imports. In addition, EIA’s forecast of strong distillate margins is likely to encourage refiners to increase refinery runs and maximize production of distillates, including heating oil.