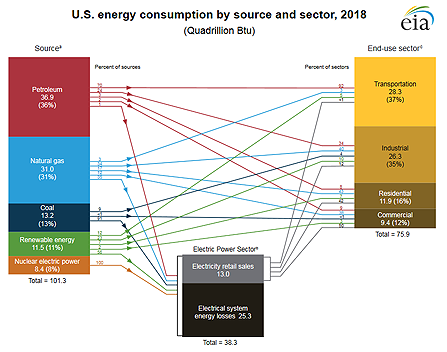 Energy consumption in the United States reached a record high of more than 101 quadrillion British thermal units (quads) in 2018, barely surpassing the previous high recorded in 2007 by less than 0.3%. The U.S. Energy Information Administration (EIA) has redesigned its U.S. energy consumption by source and sector chart to separate the electric power sector from the four end-use sectors. The new chart shows electricity retail sales to each end-use sector and the amount of electrical system energy losses within the electric power sector from generation, transmission, and distribution of electricity.

Nearly two-thirds of the energy that the power sector consumes (25 quads in 2018) is lost before it reaches end users. Most of these losses occur at steam-electric power plants (conventional and nuclear) when heat energy is converted into mechanical energy to turn electric generators. Other losses include the electricity used to operate power plants and the electricity lost in the transmission and distribution of electricity to end users.

Using primary energy sources results in other types of energy losses as a result of end-user consumption, such as gasoline burned to move vehicles or natural gas used to heat homes, and as a result of the transformation of one form of energy to another, such as refining crude oil into petroleum products. However, EIA does not separately collect this information. The Lawrence Livermore National Laboratory publishes estimates of primary energy losses by end-use sector, based on data in EIA’s Monthly Energy Review. 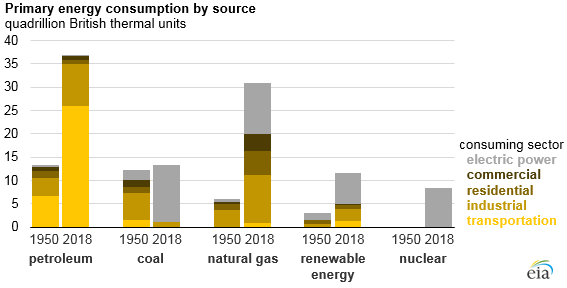 Petroleum products, such as motor gasoline, distillate fuel oil, and hydrocarbon gas liquids, have remained the largest sources of primary energy consumed in the United States since 1950. Most petroleum is consumed for transportation (70% in 2018). Petroleum shares to all other sectors have decreased since 1950.

Coal consumption in the United States decreased for the fifth consecutive year in 2018, reaching 13.2 quads, the lowest level since 1975 and about half of its peak in 2005. In 1950, nearly half of U.S. coal consumption was in the industrial sector (47%), and the transportation sector also consumed a significant share (13%). However, since the 1960s, nearly all U.S. coal has been used to generate electricity. In 2018, the electric power sector accounted for 91% of U.S. coal consumption.

First recorded in 1957, nuclear energy consumption increased to a record 8.4 quads in the United States in 2018. Only the electric power sector consumes U.S. nuclear energy, and net electricity generation from nuclear power plants has remained relatively flat since the mid-2000s.

The transportation sector accounted for 28.3 quads of energy consumption in 2018 and has been the largest end-use consuming sector in the United States since 2000, when it surpassed the industrial sector. Most of the energy used for transportation comes from petroleum, but transportation fuels now include renewable biofuels such as ethanol and biodiesel.